As dawn peaked, my eyes opened to the majesty of the Rocky Mountains laid out in front of me. I knew in that moment Buffalo Wyoming would become a part of my soul. I had arrived in this quaint town nestled on the East side of Big Horn Mountain in the dead of night and was delighted to see the mountain range bloom in front of me as I awoke and started my trek to the campsite. On the assent I pulled into a scenic view area; as I sat in a grassy field clouds rolled in like a curtain closing on a stage, they quickly covered the mountain peak in front of me and I hoped for an encore. It was fascinating and I wondered in the moment if the weather up higher was going to prove as dramatic.

Chelsey & Joshua planned a full camping weekend for their guests with a view of Big Horn in the background. I arrived at Sitting Bull campground and was in awe of all the different types of camping accommodations; RV’s, trailers, truck tents, and of course I had my tent. At the hub of activity meat was being prepared on the largest grill I’ve ever seen on a trailer, the smell of pine and BBQ delighted the senses while the sound of laughter made it known that this was a happy place to be.

Rehearsal in the meadow and setting up the ceremony site for the following day would be the first glimpse of a challenge when hosting an outdoor destination wedding … stuff. Tables, chairs, decorations, decorations, decorations…all need to be carried in, set up, taken care of, taken down, packed, and transported again to be handled at least one last time. In after site both Chelsey & Joshua recommend keeping it super simple unless you have a lot of people to help both before and after the wedding (Joshua would especially endorse this!) Lanna Wing Photography captured the meat being cooked! Both pork and lamb were served with love!

Food and beverage was provided by what seemed to be everyone. This was a group of people who traveled from at least five different states to converge on this mountainside to witness the commitment of two people they loved. Conversation went well into the late hours as I prepared for what I thought would be a good night sleep in my tent. By three AM I was so cold not only could I not sleep I’m not sure I could feel my feet any more. I wimped out by returning to my rental car, warming it up, and falling fast to sleep under my sleeping bag only to be awoken by the sound of hail on the car roof. Yes, July 4 hail. Over an inch was settled on the ground by 6AM. The drama of the sky would prove to contain an interesting story line.

By morning the camp was a bustle with fire circles, people eating, and the weekend ranger asking questions. Another hint (especially on a holiday weekend) is to confirm and reconfirm with all powers that be, how many campsites and vehicle spaces, where you can drive etc. Parking quickly became a major hitch especially for people who were not actually camping overnight. As it turns out rangers communicate with each other about as well as long seated politicians and the people they represent. An uncle quickly took over and became the organizer of cars – all was taken care of.

By the afternoon all of the hail had disappeared, the sun shimmered in the sky, Big Horn mountain peak was clearly visible and all hats tipped when the welcome prayer was said. Family and friends had prepared the food with love including a freshly smoked pig and lamb from local ranches. The tables were set, the bride was gracefully beautiful, they branded a bench to solidify their commitment, the food was served, people laughed and hugged, they danced under the stars in an open meadow with Big Horn mountain looming in the distance until they knew it was time to sleep. The moon was bright and lit the way back to the campsite. What a magical experience, what a wonderful way to start a new life together.

In any marriage there will be clouds, there will be hail, but in the end if you hold onto each other tightly the sun will shine and the moon will guide your path. 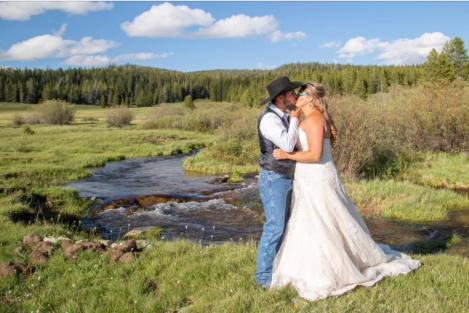 Joshua & Chelsey married each other at Sitting Bull Campground in Ten Sleep WY just up the mountain road from Buffalo NY on July 5, 2019. 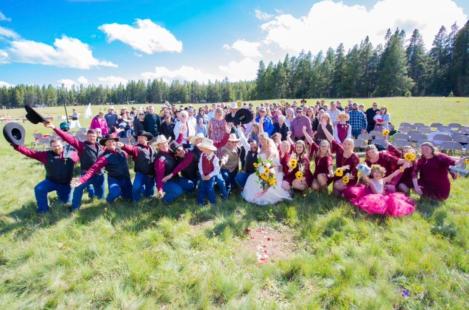 Lanna Wing Photography of Buffalo WY captured this BIG image of all the guests at the wedding located at Sitting Bull campground. 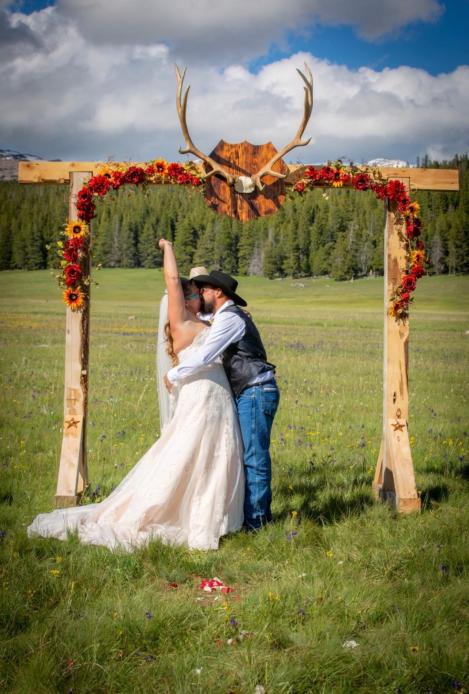 Chelsey celebrates the kiss of love with Joshua! Lanna Wing Photography captured the party into the darkness of the night.

Thank you Lanna Wing Photography for connecting the American Wedding Project with Chelsey & Joshua and for providing the beautiful images to go along with our stories.

2 responses to “Clouds a Rolling”